Angela Davis is a world-renowned political activist and leader educating various audiences on the prison industrial complex, the criminal justice system, women’s issues, issues affecting communities of color, among an array of other subjects. She studied in Europe at the Frankfurt School and the University of Paris before earning a B.A. (magna cum laude) from Brandeis University and an M.A. from University of California at San Diego. Her radical associations in the 1960s resulted in her dismissal from her position as assistant professor of philosophy at the University of California, Los Angeles. She spent sixteen months behind bars before being acquitted on all charges in connection with the conspiracy to free political prisoner George Jackson. Davis currently teaches at the University of California at Santa Cruz, and she has lectured in all 50 states, as well as internationally throughout Europe, Africa, the Caribbean, Russia and the Pacific. Her books include If They Come in the Morning (1971), Angela Davis: An Autobiography (1974), Women, Race and Class (1981), Women, Race and Politics (1989), Blues Legacies and Black Feminism (1999), and The Angela Y Davis Reader (1999). She is also an organizer of Critical Resistance, a Creative Arts Project in Michigan.

Equality at the Price of Justice
by Angela Davis 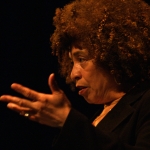 In this essay, Angela Davis discusses the operation and impact of the Prison Industrial Complex. Through her examination of the economy of incarceration, Davis demonstrates how private corporations benefit from the incarceration of increasing numbers of people of color. Davis argues that although the prison boom has increased the profits of global corporations, it “devours the social wealth” of our communities by draining them of their human and economic resources.